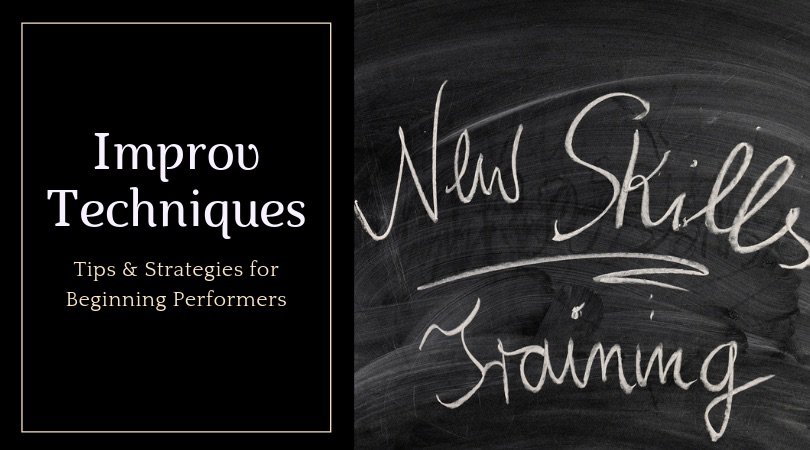 The truth is, anyone can get started in improv. After all, you only need yourself and a willingness to take part to get started.

But it is also true that it takes time to master the art of improv. Usually, you have to rely on practice and a ton of trial and error, all while accepting that mistakes will be made along the way.

However, you can cut the learning curve down dramatically by using the right approach and mindset. If you want to take your improv performance to the next level faster, here are some improv technique tips that can help you do just that.

Start at the Beginning and Hit Record

Improv relies on certain concepts. You need to be specific in the scene, answering the who, what, when, where, why, and how of it all quickly by using direct statements early on. Embracing the “yes and…” mindset is also critical, allowing you to flow with the scene instead of fighting against it.

Object work – the ability to mime an item using only your body – makes sure that you can adapt to any imagined location or circumstance. Mastering the emotional side of your delivery is also important, ensuring what you say packs the right punch. If you work with others, then learning how to adjust your approach based on the relationship between your persona and those of the other performers is similarly critical.

Practice is often crucial for getting a grip on the basics. However, you can also make a lot of headway by recording your performances and reviewing them afterwards. Gauging where you are today or how far you’ve come is difficult if you are relying on memory. However, when you have video to look back on, the process is significantly easier.

Know, Respect, and Respond to Your Audience

One of the most important things to remember during an improv performance is this: it isn’t all about you. While you might be the one on the stage, improv also involves the audience, so you need to take them into consideration.

After all, not everything is funny (or appropriate) for everyone. You need to approach things differently if you are performing for adults and there is a two-drink minimum than you would during a family-friendly show.

Before you begin, survey your audience. Notice their ages, their mood, and anything else that can serve as a clue. Then, as you perform, be ready to adapt. If a particular topic or approach has them rolling with laughter, you’ve discovered something valuable. Similarly, if something falls flat, you also know something that will help you refine your approach.

Make Everyone Else Look Good

When you are on stage, it is easy to let your ego take over. But it’s vital to remember that most improv work is team-oriented, so trying to hog the spotlight isn’t going to lead to a great scene.

Instead of focusing on your agenda, shift your mindset to everyone else. When you strive to let your scene partners shine, you are elevating the entire troop.

Plus, most improv performers will reciprocate, giving you a chance to take a turn in the spotlight too. This allows everyone to play off of one another to keep the scene’s momentum, resulting in a better performance.

This also makes it easier for your character to serve its function. Not everyone is the focus of each scene; some are just there to facilitate forward progression. By embracing the idea that everyone else needs to look good, it isn’t as hard to take on these smaller, yet critical, roles in a scene. After all, you aren’t letting ego get in your way, so you can see the value in being the character the scene needs instead of the one you want.

In real life, people act within certain societal norms. For example, if someone you are close to says they look terrible today, your instinct is to reassure them because you care about their feelings. When out in public, if you are walking through a door and someone else is close behind, you pause to hold it open for them because it’s polite.

While these societal norms have their purpose, they aren’t necessary in improv. You are allowed to abandon your voice of reason and sense of compassion, giving your character freedoms you won’t find in the regular world.

So, before you let your societal instincts take charge, consider the not-suitable-in-life alternatives. You may end up feeling liberated and could find some options in a scene that you wouldn’t think of otherwise.